Much like Tulkon, I am not going to be able to make Liberty Con this year either. Still holding out hope for FenCon in September.

Y'all be good, and if you can't be good, be sneaky.

Due to circumstances WAY beyond my control, I've had to cancel my trip to Tulkon. I'm still sending signed books that will be at the North Texas Troublemakers booth.

LibertyCon is still on the itinerary though, so if you're there, track me down.

Ok, This Bugs Me

I'm pretty sure I'm not alone in this, but it really bugs the hell out of me when someone leaves a mediocre rating on one of my publications without leaving a review. I understand it may not have been your cup of tea. Hell, I even understand that my story writing and editing skills are still as rough as 36 grit sandpaper. BUT, if you're gonna ding me at least tell me what you didn't like.

I don't need a detailed literary critique. A few sentences is sufficient. I can't improve if I don't get feedback on what you thought sucked.

Ok, I feel better getting that off my chest.

Y'all have a good day; be kind to each other; and as always if you can't be good, be sneaky.

News From the Edge

Ok, I've been quiet for WAY too long. There's been a lot of big stuff going on that has kept my attention elsewhere, but I'm at a point where I just have to stop and let some of the pressure out of my head.

My progress on being a healthier me is progressing nicely, provided I can keep from doing stupid stuff that causes me to have to backtrack. I saw a thing the other day that said something about things that hurt me when I was 12. You know falling out of a tree, crashing your bike, jumping off of the house. At 50+ those things change to sleeping wrong, sneezing, or in my case getting up out of the floor. That's seriously all I did, and it busted my hip joint and it's taken almost three weeks to stop walking with a limp.

Despite my talent for hurting myself, my trainer has kept me moving in the right direction and to date I am down about 35 pounds, but I believe there has been some muscle growth to offset fat burning. That's why I'm using things like just over 6 inches gone from my waist, one blood pressure pill eliminated from my daily meds, and my A1C is in the mid 5's. Wins all the way around.

Second thing is my wife and I are preparing to help two of my kiddos move out into the world and start living their life on their own. Don't get me wrong, we'll always be there, but it's time for them to start "adulting" as they call it.

Part of that process also involves getting our house ready to sell, so we can move in and help my dad take care of his place and himself. I've reached that part of my life, and quite frankly it's every bit as daunting as becoming a parent was. Still trying to wrap my head around it.

The last weekend's gathering affectionately known as FoolzCon reminded me that I should be doing more writing. I mean, I have been writing, just not a lot. I'm taking steps to increase that, but until we're all settled in the new place it's gonna be spotty.

I am going to Tulkon in Tulsa as the end of the month, LibertyCon in June, and have started making plans to attend FenCon as well. If you're there and wandering about, look for the guy with the "deer in headlights" look in his eyes.  Since Tulkon is my first con, I'll be somewhere close to OldNFO and Lawdog most of the time.

In preparation for this mess I have also pushed To Kill a War Leader into a paperback version on Amazon. I will have signed copies with me at the events.

Convention links and the amazon link are below.

New Anthology is Out 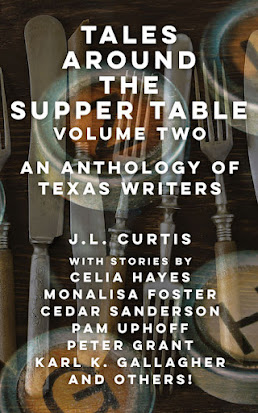 Back in September, I posted a chunk of a short story I was writing for a second volume of Tales Around the Supper Table.  Well, it went live a couple of days ago, so here's the link. As of right now it's only available on Kindle, but a dead tree version is pending.

Buy it for the Kindle HERE.

Same link will work for a hard copy once it is available.

Hope you enjoy it.

On my way home from work today there was a "dude" cutting through traffic in his Acura TL. Car looked nice and had a sporty sounding exhaust, but the way the guy was driving it was kind of ticking off the crotchety old man in me.

We ended up side-by-side at a light and he sat there revving his engine. I, of course, took it as a challenge, so I staged up. Foot on the brake and throttle down just enough to sit on the stall of the converter. Light turned green and my 4000 pound Mercury Grand Marquis put a couple of car lengths on him. I backed off at 60 and he passed me.

That was when the F250 beater that had been behind me whipped over and passed me too. He rolled up next to the Acura and they took off. This was where I got to really laughing because that shit box diesel F250 gapped that Acura like it was sitting still...twice. Amazing what a well tuned diesel will do.

Have a great weekend.

Another Trip Around the Sun

Today marks my 52nd orbit. Had to renew my license and hear the nice lady say she was changing the hair color from BRN to GRY. Dammit. Oh well, like they always say "any day above ground is a good one."

On the upside, I'm actually losing weight for the first time in my life. Down about 15 pounds so far with about thirty left to go.  Goal is to keep that A1c down in the mid 5's and maybe cut back or eliminate the BP meds for a while. Tired of taking pills. To be honest I've always hated exercise, so it really pains me to admit I feel better than I've felt in years, no scratch that, decades.

On the writing front, I'm slowly making progress on things. Nothing to really share now. Work has kept my mind occupied way more than I like, which makes shifting into creative mode difficult at times. There are things working and things coming, I just can't nail down any timelines right now.

Oh and the project cars and cars that keep making themselves into projects. One of the downsides to having a penchant for older cars is that they take a lot of TLC to keep on the road. Could I afford a new car? If there were any to have, probably. Do I want one? Not so much. Well, I mean I wouldn't turn down a new Mustang GT, but I don't think anyone is about to give me one.

Everyone take care of yourselves and those you love. Remember to be good, and if you can't be good, be sneaky.

Much like Tulkon, I am not going to be able to make Liberty Con this year either. Still holding out hope for FenCon in September. Y'all...

Wayne
I grew up in an oil field town in north Texas. I found a love of reading at an early age and a love of writing not long after. I still live in the same part of Texas with my wife, three offspring, and a loud mouth rat terrier. I'm an accountant by trade, but I continue to write to stave off insanity.